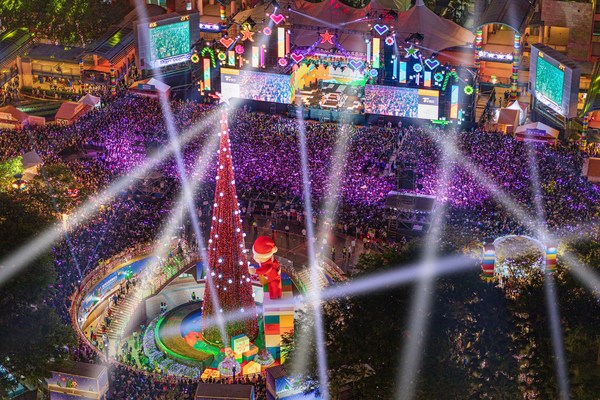 NEW TAIPEI CITY, Taiwan, Jan. 7, 2022 /PRNewswire/ — The highly anticipated "2021 Christmasland in New Taipei City" was launched by New Taipei City Government to much fanfare in early December last year (2021). In cooperation with the world-renowned Danish toy brand LEGO for the first time, allowing the landmark event, recommended by internationally renowned media for six consecutive years, to once again become the focus of global attention. The 31-day Christmas event drew to a perfect ending on Jan.2, which is estimated to have attracted a total of 4 million visitors. Under strict compliance with epidemic prevention measures, the event contributed to this year’s "Christmas craze". Director Chiang of the New Taipei City Tourism and Travel Department pointed out that New Taipei City has not only created a city with highlights that attract global attention, but also generated related business opportunities, allowing people from all over the world to once again experience the infectious charm and vitality of the "2021 Christmasland in New Taipei City", the grandest winter festival in Taiwan. Although the world is still under the shadow of the Omicron outbreak, eventgoers still showed their commitment to safety, and wore masks throughout the event. Thanks to everyone’s effort, the "New Taipei City Christmasland" has caught the attention of the world.

In cooperation with the world-renowned Danish toy brand LEGO for the first time, allowing the landmark event, recommended by internationally renowned media for six consecutive years.

In addition, Malaysia’s "Sin Chew Daily" reported that despite the COVID-19 pandemic impacting all over the world, under highly self-discipline epidemic prevention measures, Taiwan was able to hold large-scale celebrations like "2021 Christmasland in New Taipei City" and people still celebrated Christmas normally in Taiwan. This event could serve as a role model for other similar ones. On the other hand, "2021 Christmasland in New Taipei City" became the most searched Christmas festival event in Taiwan.

Chiang Chih-Wei, Director of the New Taipei City Tourism and Travel Department, noted that while the world is facing down the Omicron virus, the city government undertook a variety of measures to prevent the spread of the epidemic during the event. For example, at the B1 access road leading to the main decorative lighting area of the New Taipei City Square at Banqiao Station, seven 222nm E-vio sterilization lights were installed. As soon as people passed by the ultraviolet light area, smart sensors automatically activated the machines to perform complete disinfection and sterilization of the body and clothing. In addition, a dedicated food and beverage area was also set up in the decorative lighting area, and alcohol disinfection, body temperature measurement and mask-wearing were strictly enforced, thus ensuring a safe and secure environment for the public. Thanks again to all participants for their cooperation!