STARLUX Takes Delivery of First A350-900

Ready to Open Markets Across the Pacific Ocean

TAIPEI, Oct. 29, 2022 /PRNewswire/ — STARLUX Airlines (SJX) took delivery of its first A350-900 today at Airbus Headquarters in Toulouse, France. The delivery ceremony was led by STARLUX Airlines Chairman K.W. Chang and CEO Glenn Chai, who were both excited to mark the new milestone.

Chang arrived in Toulouse to participate in the delivery process, and to personally fly this new A350-900 back to Taiwan. The aircraft is expected to arrive at Taiwan Taoyuan International Airport at 15:00 on October 29 local time.

"This delivery is a milestone for STARLUX Airlines. The A350-900 is our first large widebody aircraft, which will allow STARLUX to open markets for longer routes, and this also marks the next step in our partnership with Airbus, with 17 more A350s deliveries in the future. With the addition of the A350-900, the STARLUX fleet now can cover short, mid, and long range flights, providing service to passengers outside Asia," said STARLUX Chairman.

Christian Scherer, Airbus Chief Commercial Officer and Head of Airbus International said: "With an all-new generation, all-Airbus fleet, STARLUX is bringing new levels of comfort and efficiency to the premium market. As the flagship aircraft in this fleet, the A350-900 will carry the airline’s brand on its longest routes as it opens up to new markets. We wish the airline every success as it spreads its wings to more destinations across the world."

Ewen McDonald, Chief Customer Officer, Rolls-Royce Civil Aerospace, said: "We would like to congratulate STARLUX on taking delivery of their first A350 passenger aircraft, which is powered by Rolls-Royce Trent XWB-84 engines. This delivery builds on our partnership with STARLUX who earlier this year took delivery of their first A330neo, which is also powered by our Trent 7000 engines. We look forward to further supporting STARLUX to maximize their fleet performance and achieve operational excellence. We thank STARLUX for their trust in Rolls-Royce, and we will continue our commitment to providing reliable power and world-class service to help STARLUX fly higher and further."

The delivery of B-58501 is the first of the eighteen A350s STARLUX has ordered and is planned to be put into service in January next year after the approval process and required crew training. There will be another A350-900 added to the fleet this year. The A350-900 will initially fly to major cities within the Asia-Pacific region and start operations to Los Angeles in April 2023.

The A350-900 is powered by twin Rolls-Royce Trent XWB engines, which are the largest of Rolls-Royce’s renowned Trent family and the most efficient large aero engine flying today. The engine is designed and optimized specially for the Airbus A350 family, contributing to the A350’s 25% fuel burn improvement and helping reduce the aircraft’s overall noise footprint. As with the current fleet of A330neos, STARLUX has also signed a long-term TotalCare service agreement for all A350 aircraft with Rolls-Royce engines, further strengthening the airline’s partnership with the jet engine manufacturer.

STARLUX’s A350 is the first A350 to offer First Class around the world. It is made from approximately 70% advanced materials such as carbon fiber and has the lowest CO2 emissions in its class, and also the first aircraft in the Asia-Pacific region to integrate the latest evolutions, which comprise improvements to the performance and also to its Airspace cabin. Compared with other A350s in service today, the new A350-900 for STARLUX has a cabin which is wider by 4 inches and longer by 35 inches, which gives more room for passengers in all classes, and also larger galleys for the cabin crew.

The aircraft also features the very latest electrical dimmable windows, blocking 99.99% of visible light, switching twice the speed of the previous generation. STARLUX’s aircraft is the very first A350 to put these new windows into service. Moreover, STARLUX is also the first airline to install dynamic secant luminous panels on an A350. Three motion panels located at two doorways and the very end of Business Class, demonstrating different shapes of ceramics with leaves gradually growing out to make passengers feel at home. As the A350-900 will operate long-range routes, STARLUX’s cabins can be customized with ambient lighting depending on the stage of the flight. There are also three seasonal themes to choose from: Lunar New Year, White Christmas, and Moon Festival.

The premium four-class layout features four seats in First Class, 26 in Business Class, 36 in Premium Economy Class and 240 in Economy Class. STARLUX is the first airline in Taiwan to offer First Class. First Class suites are built with a 60-inch door wall, allowing the passengers to have a personal suite on the aircraft. A personal wardrobe is provided to store luggage. Business Class seats feature a 48-inch door and a cozy lamp to provide warmth. Seats in both First and Business Class can convert into a fully lie-flat bed, and also come with a "zero gravity" feature to offer extra comfort and relaxation. Premium Economy Class seats have been specially designed with a leg rest and footrest bar. To prevent the leg numbness in Economy Class, the thickness of each seat has been reduced, and redesigned with a unique S-shape to provide more legroom.

The A350 inflight entertainment has been elevated to a new level. For First Class, each seat is equipped with a 32-inch 4K screen, while Business Class can enjoy our 4K resolution with a 24-inch screen. Even Premium Economy Class and Economy Class passengers can also enjoy 4K resolution with a 15.6-inch screen or a 13-inch screen respectively. Furthermore, all passengers on the A350-900 can use Bluetooth to connect to their own headphones.

To commemorate STARLUX’s first A350-900 delivery, as well as the union of three Airbus flight models into its fleet, STARLUX cooperated with Airbus and the professional production team Master Films to take Airbus test flights as an opportunity to shoot an air-to-air video of all three models in flight. STARLUX is also the only airline in recent years to complete a formation flight, featuring all three of its Airbus types: A321neo, A330neo and A350. The arrangement process was intricate, taking almost a year to finalize the shooting details. STARLUX, Airbus and Master Films discussed extensively regarding the concepts of the video, including the formations of the airplanes, the shot angles, and the flight path. To perfectly execute the unprecedented mission, Airbus assigned its most experienced pilots to fly the airplanes. The air-to-air filming does not only promote STARLUX, but also to promote the love of aviation itself, setting a new standard for air-to-air filmography.

STARLUX has entered a new phase with the delivery of the new A350-900. With the addition of another A321neo – B58211 scheduled to be delivered tomorrow, STARLUX will have eleven A321neos, four A330neos, and one A350-900. By the end of the year there will be another delivery of two A321neos and an additional A350-900, which will increase the capacity for STARLUX as the company prepares to begin service to markets outside Asia. With the reopening of Taiwan’s border and as more aircrafts are ready to be delivered, STARLUX will be able to provide luxurious service to more passengers and to extend the network with utmost efficiency.

To commemorate STARLUX’s first A350-900 delivery, as well as the union of three Airbus flight models: A321neo, A330neo and A350-900 into its fleet, STARLUX cooperated with Airbus and the professional production team Master Films to take Airbus test flights as an opportunity to shoot an air-to-air video of all three models in flight. 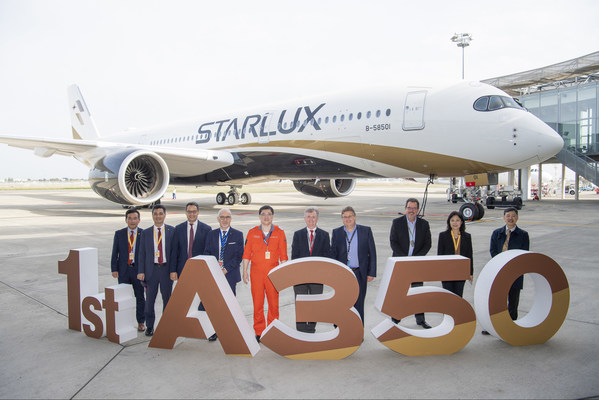