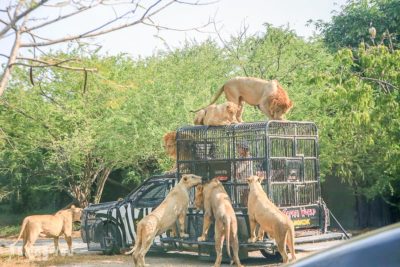 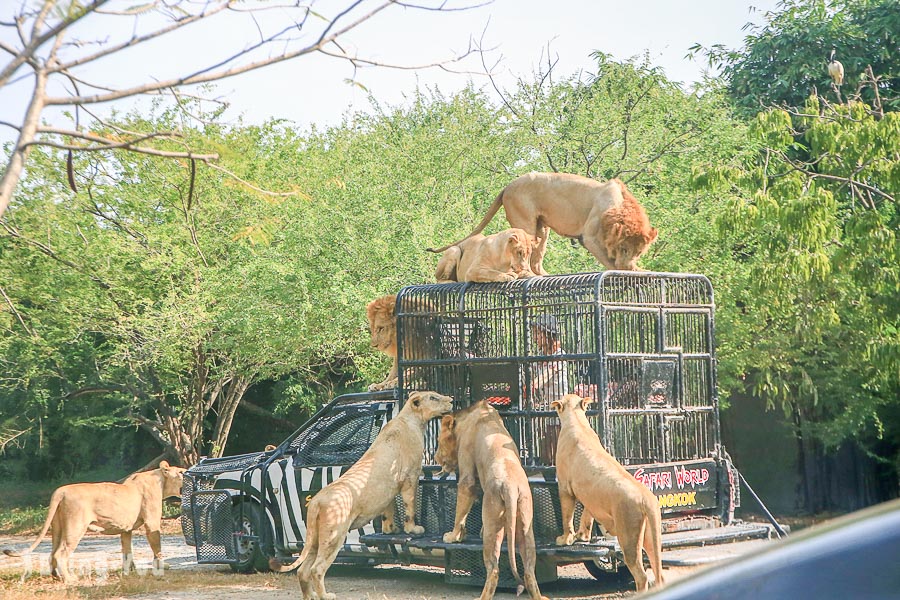 Get in here guys and girls! Here is my ultimate guide to Safari World Bangkok which helps you plan the most epic trip this upcoming vacation.

This incredible attraction is an hour’s drive out of the city core and split into two areas: Safari Park and Marine Park. Safari Park is where you get around inside a bus ride for about 45 minutes. Ironically, you will be trapped inside the car and not the animals. This is also where you can watch a lion and tiger feeding show. Marine Park is also a great destination where most of the shows gather to entertain kids.

Both of the parks are home to different animals and educational shows for an entertaining and educational day. To visit Safari World, you want to spend an entire day plus traveling back and forth from the city center. Read on to find out how to get there and what to expect before visiting Safari World Bangkok!

How to Get to Safari World from Bangkok Downtown?

As there is no direct subway, train route, or bus from the city center of Bangkok to Safari World, the only options here include a Grab ride, a taxi, or a tour bus.

How Many Parks Are There within Safari World Bangkok?

Simply put – you have two: Safari Park and Marine Park. The tickets for these two areas are sold separately if you get there by yourself. In case you book a tour online as I did, they are both included.

Out of the two areas, Safari Park is the most impressive as all the animals roam free in their own habitats and approach travelers moving in a car. So keep in mind that you won’t be walking free but with a car ride only.

On the other hand, Marine Park is a stellar place to walk and get up close with all the animals. Marine Park is also home to 8 spectacular shows and performances that kids specifically love.

First thing first in the morning, I got picked up by a local guide around 8 am and transferred to the park when it was just opened. The guide would be escorting us throughout the trip in the day and navigated around to show us where the animals were.

If you have your own vehicle, you can drive it all through the Safari Park. In case you don’t have one, you can ride one of the park buses that drive through the safari at an additional charge.

Let me tell you – the first impression never disappoints! Surrounding us is a massive grassland and meadow where all the animals like zebras and camels are having breakfast next to a huge pond.

Seeing all these massive babies up close was a wonderful experience that was almost shocking! The driver would slow down so you can see them running free. So get your camera ready and prepare to see the “Madagascar” movie coming alive!

A few steps further and you’ll see some nasty ostriches playing behind a fenced area. Due to their playful nature, the ostriches are raised behind the fence to deter them from attacking visitors.

Further afield, there are giraffes, rhinos, camels, cows, sheep, and deer sharing the same living habitat. The living conditions are so good and thriving that the birds can even escape to the nearby areas and come back later in the day. There are no cages or such. The only thing the staff focuses on is how to nourish the natural habitat so the birds never want to leave.

One of the rarest animals raised at Safari World is the oryx. They are recognized by a pale pelage with contrasting dark markings on the face and on the legs.

Moving towards the end of the tour at Safari Park are the lion and tiger feeding shows which took place around 9:45 am. I’ve never seen anything so lively as this thinking about what’s going on in the “wild wild world” out there. The lions and lionesses gather in groups with bullet eyes on their meal. As soon as the feeder comes, those massive beats rush to the vehicle and climb to the top munching on their meat.

Marine Park was the highlight in the afternoon. You have to pass through a customs guy who makes sure you don’t bring outside food and water. Once the security check was over, I followed the guy into the park waiting for the shows to start.

Each of the shows is dedicated to a different species. Some of the shows stand out from the rest such as the dolphin show and the sea lion show. The entertaining Hollywood Cowboy Stunt Show is definitely a charm.

Apart from the shows, you can also take photos with the animals. Kids always love feeding the tiger cub under the instruction of a guide.

At the end of the day, we capped off the tour with a stroll around to see all the animals. The benefit of having a guide by your side is how he helps you learn so much from the wild world around you. From the funny Ring-Tailed Lemur and Manatee to Flamingo, you’ll end up with a big batch of knowledge tucked inside your head on the way home.

Safari World, by all means, is a must-see for everyone. I highly recommend booking a tour with a local guide, especially when you’re gonna spend the whole day learning about animals!