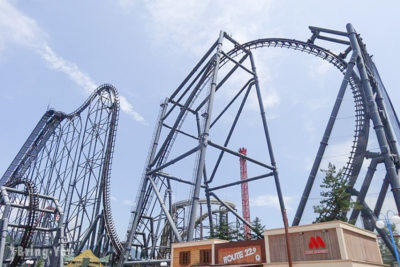 Is Haunted House Becoming less thrilling after the Modification? We spent a morning in the Fuji Q Highland for only the Haunted House, I know it sounds crazy to go all the way to Fuji-Q but only spend a morning in Haunted House, but we were not of roller coasters, and the afternoon cycling around the nearby lovely Lake Kawaguchiko was awesome, s…

Is Haunted House Becoming less thrilling after the Modification?

We spent a morning in the Fuji Q Highland for only the Haunted House, I know it sounds crazy to go all the way to Fuji-Q but only spend a morning in Haunted House, but we were not of roller coasters, and the afternoon cycling around the nearby lovely Lake Kawaguchiko was awesome, so I think the day trip around the foot of Fuji was perfect for us.

Back to the topic, Haunted House at Fuji-Q is the longest and most scary Haunted House in the world, and they keep modifying the process and interior of the hospital-scened house, from a horribly scary one to a suit for all, I was actually freaking out for the first ten minutes, but since get used to the dark and dead things, it was not so frighten for the next thirty minutes, but all in all, it was still the best Haunted House I have ever been to, let my story tells you.

My morning at Fuji Q Highland was a straight through the park to the Haunted House, the path was diverged differently from the main stream of those running toward roller coasters. Soon after opening of the park at 9:00am, every crazy has arrived at Dodonpa, Fujiyama or Takabisha and got ready to be screaming, then the shrieks lasted constantly in the air of the park for hours.

After a 10 minute running toward Haunted House passing by some family and friends rambling to our contrary, we were stopped out of the hospital by a man in white, blood-soaked nurse clothes standing behind a board said “Open Hour: 10:00”, well, since Haunted House was the only attraction on our agenda, we made a short tour around the park then back to the hospital later. We watched those ignorant people getting wet while photographing and screamers with their legs up facing the sky happily frighten. For those who are non-thrill seekers, I think it’s more fun watching frightened people screaming than speeding in the sky crying for mama.

Upon 10:00am, visitors were allowed to enter the main gate of the hospital for the ticket machines, with no knowledge of a word of Japanese, we followed the other visitors and bought the looked-like entrance tickets, while waiting in line at the entrance of the hospital, I started to regret and hope I was not so stupid to step into the haunted house, then I recalled that the other button on the machines was actually the charm to keep the ghosts away from cowards like me, but I was already far from the machine nearly a step into the hospital, then I found that of so many visitors, there was only one guy that bought the charm, for his kid, well, let’s get scared all together!

Not long waiting outside the hospital, the deadly-pale nurse led us into a room for a brief introduction of  some rules in the Haunted House, but every word was in Japanese which was no help for us at all. Then we were left in the room waiting until our number was called(You can count even you don’t understand Japanese), we joined the family in a video room for a short horror film introducing the hospital and a runaway story of a group of teenagers from the zombies.

Then we were separated from the family, forever, yeah, we never saw them and none of the other alive again in 40 minutes, until we went out of the hospital, Vesic and I were left to face the dark rooms alone, and we didn’t receive a map or light which should be handed to us as other bloggers’ info. Well, this really freaked me out though !!!

My muscles tensed up, eyes scanned back and forth , we were alert at every corner for fear of the ghosts would jump from everywhere, but after few minutes, nothing had happened, only dropping sounds and fake dead body falls from the ceiling. We checked several doors and curtains with no actual zombies inside, and arrived at a long corridor illuminated with red warning light, and BANG! A zombie broke out from a wall started chasing behind us, we spontaneously hold each other’s hand and RUN in a speed as if we were on a 100-meter dash, after scurrying into the operating room, the zombie has already disappeared, the corridor was as quiet as nothing has happened.

Since then, we became more scared and alert, but also felt excited after the runaway from a zombie, we decided to light up the headlight we prepared in advance for situation like this, and moved ahead.

Into the next room, there was a zombie sitting on the bed staring at us, there’s no way to fight with the zombie, the only choice was to PASS it! But the zombie walked toward us and pointed at our light, “No light here!” It was clear we had to venture our way out without our last hope then.

But it was nothing special since the runway on the corridor, there were still zombies somewhere in the rooms, but not so much surprise, yeah, there WERE zombies of course.

The modified haunted house has nothing like any blogs I read online, there’s no map for us to get lost in the hospital but arrows leading us to the exit. The light is forbidden but the entire hospital has modified to be less haunted and dark as it used to be, I was able to observe clearly every detail of the organs, mortuary and operating tools, there were no scene that more than dozens of zombies would outflank visitors. Will it be the reason that zombies were still sleeping in the morning or they just modified it into a haunted house suitable for all ages?

There was still a surprise left, but I wouldn’t make it here, come to the Haunted House and run, if you have survived from the house, you would know what I am talking about. Any way, the Haunted House is still a great place to get scared and have fun with friends, to make fun to the fullest of it, try as what we did, wait at the exit to welcome the next groups running toward you, we saw a large group of 10 people screaming all the ways out of the hospital, and found that they were actually three different groups combined into one while in the house, most of the girls ran out with fear and face paler than zombies. When all of us went out of the house, groups of visitors in line were watching us and grinning from ear to ear, this perhaps was the most attractive part of the Haunted House: Watch others being scared.