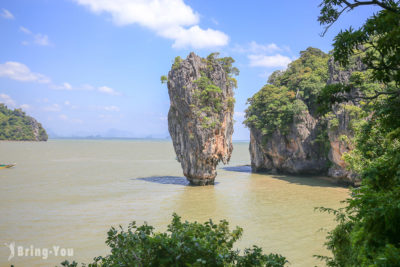 A One-Day Getaway to James Bond Island and Phang Nga Bay by Speedboat: The Caves, The Meal, The Limestone Cliffs 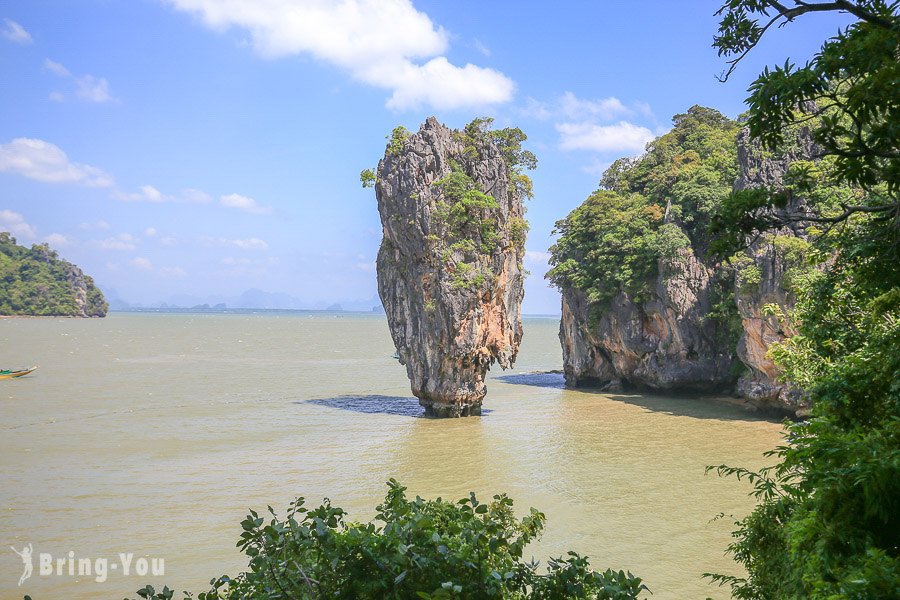 James Bond Island is in fact not its original name. The island was once featured in a Hollywood blockbuster 1974 Bond movie ‘The Man with The Golden Gun’ with Roger Moore and Christopher Lee and that’s how the island got its name.

James Bond Island is famous for good reasons. The towering limestone rock formation witnesses the change of history, teaming up with other islands that form into an exciting one-day boat trip by boat out of Phuket.

And that’s how we got a chance to observe James Bond Island on an intimate level. The boat trip we signed up for was a speedboat, starting from 10 am when we left the dock and returned to our hotel at 6 pm on the same day. Read on to find out how we rocked James Bond Island in our own way and why you should do the same!

This one is more like an island-hopping day with James Bond Island being the star of the show. The only way (or perhaps the most popular way) to visit James Bond Island is by boat. We booked the trip a few weeks in advance to avoid sold-out tickets and got the local driver to pick us up right at the hotel and transported us to the port around an hour later for the departure.

While the one we signed up for was a speedboat tour, you can also choose to go with a cruise tour or a long-tail boat. All those three options make a stop at James Bond Island but the itineraries vary including timeline, duration, and price.

Out of the three options, the long-tail boat tour is our least favorite. It’s the cheapest out of the three but doesn’t have that level of comfort when the heat keeps kicking in from all sides of the ocean.

The speedboat – the costliest out of the three – turns out to be the best option. Fruits and drinks are stocked up inside all the time and it’s all well covered so you don’t get any heatstroke.

The cruise trip is a better call for seniors who cannot stand consistent waves or are seasick. It’s always packed with people filling out all two of its decks.

What to Pack Before Visiting James Bond Island? A Digestible Survival’s List

How to Rock Phang Nga Bay and James Bond Island within One Day? A Full Itinerary

The tour operator let us choose our hotel from one of the three pick-up areas they provided. That’s how we got in the van at 9 am and transported to the port and waited for a local guide to come over and brief us about the upcoming itinerary.

Sunny, our guide that day was fabulous! He’s one of the friendliest and funniest Thai guides we’ve ever met, who tends to twist his name from Sunny to Rainy when it rains out there.

It was supposed to be in the afternoon but the first stop of the day was full of visitors so the guide switched to James Bond first to dodge the crowd.

The rock formation around the island is breathtaking, especially when the sky is crisp and you can literally obtain plenty of photogenic spots to feed your ‘Gram. And everyone keeps talking about the majestic piece of stone standing in the middle of the sea.

The turquoise water is decent and the sandy shore is not that extensive. Remember that James Bond is a tourist attraction but it’s still a gorgeous tropical island to dig “behind the scenes” out of the movie.

The village’s claim to fame is a series of stilt houses swathing the tip of the island, mostly dominated by Malaysian Muslim fishermen. The peaceful sense of a Muslim village is truly outstanding with schools and mosques popping up everywhere.

The meal we had was satisfying. What a great way to feel recharged and alive with all those fried rice, noodles, shrimps, curry chicken, and fruits dished up in a great portion with savory tasting notes!

We decided to have a stroll around the village for an up-close look at the stilt houses and all those quirky souvenirs displayed all around.

The Secret Realm of Hong Island

Hong Island is a mystic gem with the boat tour into the limestone caves being the biggest hit. How lovely when the boatman was clever to get away from other tourist boats so we all had that little private moment to enjoy.

With the lush rainforest flanking above and cuddling us humans in its shades, the boat ride around Hong Island was more than just beautiful. The eroded caves stand the test of time, lying completely hidden behind the trees. Only when the tide comes in and sunlight reflects on its calm, mild surface will the caves come alive and brightened.

This is where you’ll be walking on foot to explore the limestone caves on Panak Island, with all the quirky limestone pillars brought to life by natural erosion by the sea access. Photos are fine but no touching is allowed since it will affect the natural erosion progress.

Naka Island: The Last Stop to Unwind and Recharge

As the tour came to an end, nothing seemed better than a lazy moment walking on the white sandy shore and chilling with a coconut. Naka Island is all about swimming, sunbathing, lounging back, and photo-ops. If you want to get one of the wooden recliners on the beachside, there should be a small fee applied.

The sandy shoreline here seems to extend forever. And when we got there by sunset, the sun cast its glitters on the surface of the ocean while the mirages of the distant mountain ranges contributed to an overall blissful seascape.

And that’s how we capped off our one-day trip to James Bond Island and Phang Nga Bay. It was a lovely escape in the summer and worth every penny. Even though James Bond Island is touristy, the scene remains untouched to a certain degree. Don’t take our words for it! Try it for yourself!