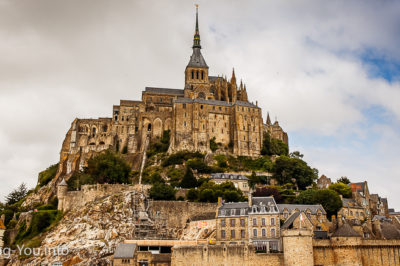 How to Get to Mont-Saint-Michel from Paris: Things to Know Before you Visit 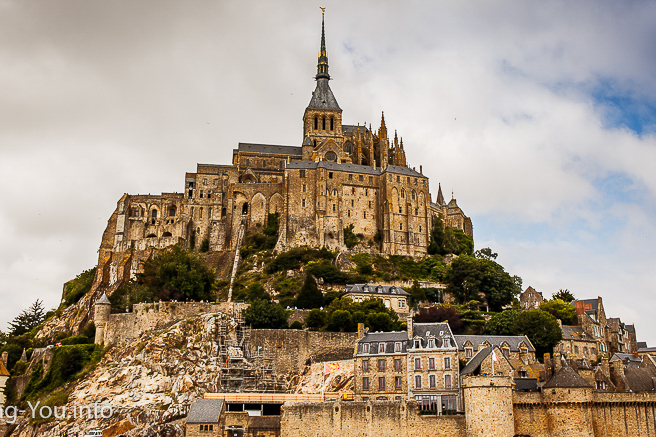 Venturing out to Mont-Saint-Michel is a little daunting for first-timers. Collect our insightful tips in this Mont-Saint-Michel travel guide to book your ticket, learn about tides, avoid the crowds and learn how to navigate.

We love history and ancient architecture, especially the ruins and castles dating back to the Medieval era. So far, one of the coolest architectures we have ever seen is Mont-Saint-Michel.

Tucked away on an isolated tidal rock in the Gulf of Saint-Malo, Normandy coast, Mont-Saint-Michel is beautiful. We were hooked by one of the photos showing its reflection on the calm water, and at that moment, we decided that we had to see it no matter what happened!

So here we are, writing to share with you one of the coolest experiences we had during a few weeks in France – visiting the Mont-Saint-Michel on a windy day in summer. Read on to find out what we have to say!

3 Best Ways to Get to Mont Saint-Michel from Paris

Opt for a car ride if you don’t like to switch trains. A ride like this is no more than four hours. Take on the A13 motorway heading to Caen before turning to the A84 motorway towards Avranches to Rennes. This is the shortest route from Paris to Mont Saint-Michel.

This is where I booked my day tour

How to Arrive at Mont-Saint-Michel from the Parking Lot?

It’s a free shuttle to Mont-Saint-Michel. If you drive, park your car at the designated parking areas and then line up to join the free shuttle bus. The Passeur Shuttle will be stationed at the shuttle hub next to the Tourist Information Centre. You will see it right away from the parking area. The Passeur shuttle is open from 8:30 am to 10 pm.

Wow! Classic! Visiting a Medieval castle cannot go without a horse-drawn carriage. So book a horse ride like this and make a perfect pair. The horse-drawn carriage is known as the “Maringote”, which also starts at the shuttle hub next to the parking slot.

The final way – walking. Take this sea-crossing trail for 45 minutes from the parking lot. Or, rent a bike and bring it along to arrive faster!

Best Time to Visit Mont-Saint-Michel: When Should You Really Need to Head out to Avoid the Crowd?

Morning! Make it early in the morning to avoid the crowds and escape from the heat, especially during summer. Summertime is also the best time to visit Mont-Saint-Michel.

Make sure to book the tickets to the Mont Saint-Michel abbey in advance during the high season. Winter is not too bad to visit Mont-Saint-Michel but you’ll have to layer up for the cold!

The only time when Mont-Saint-Michel is inaccessible is during the high tides. High tides creep in twice a day, surrounding the island and making it completely isolated for an hour and a half. You want to spend a few hours on the island and the Abbey while waiting for the incoming high tide.

Check out Office du Tourisme to be updated about the times and heights of the tides. Alternatively, ask the information center by the parking lot.

Mont Saint-Michel is free to visit, and you only need to pay for the abbey on the peak of the island and parking fee. We always bought tickets online in advance to get a good deal and avoid selling out, which is probably the worst case. The tickets for the abbey start around 11€ but it’s free for European citizens 25 years old and anyone under 18.

The abbey fast became a world-famous silhouette. The dramatic Romanesque abbey pierces through the sky and can be seen from miles around. To reach the abbey, you’ve gotta walk the busy street of Grand Degré where you see the Le Gouffre staircase and get to the top of the large terrace facing west up above.

This journey is pure joy itself. It’s crowded, yes! But it’s worth it. All that climbing makes you even more excited to explore such magnificent architecture at the end of the road.

Take a guided tour if you want to dig into the story and learn about the magnificence of Abbaye du Mont Saint-Michel to the fullest. It should be on your top list if you visit the abbey for the first time.

What Else Can You See and Do on Mont-Saint-Michel Aside from the Abbey?

While the abbey is the talk in town, it’s not the only attraction to keep you hooked. Whisk your way up to the lookout point after seeing the abbey before strolling around. There is also a small museum, a cemetery, and a church, making it pretty exciting to explore on foot. During four hours on the island, take a stroll around, sneak into the alleyways, climb the stairwells, and snap some shots of the ancient houses.

Every year in July and August, the Chronicles of the Mount night show is hosted at the abbey. When the doors are flung open after dusk, come in and blend into the visual effects of lights, sounds, and arts projected on each of the chambers in the abbey. Chronicles of the Mount is a once-in-a-lifetime experience where you get to know the history of the abbey with the help of a state-of-the-art light show.

Those who want to stay on the island can reserve with one of the hotels there but the prices are on the higher side of the spectrum. Eateries, bistros, and cafes also line up so you don’t have to pack anything to eat. Souvenirs shops are also available.

What to Expect When Walking Grande Rue?

La Grande Rue, or Main Street, is the centerpiece of the island. This is where all the main happenings take place. The street is really, really small but it’s so crowded and fringed by houses (like actual houses where the islanders live), shops, inns, and restaurants. Many of these eating holes survived history and they dated back to as far as the 15th century.

There are multiple hotels on Grande Rue. If you stay on the island overnight, you can experience the quiet walk along the main street once busy in the morning.

We stopped by La Mère Poulard’s during lunch break. It’s actually a hotel itself so you can consider it. Their puffy wood-fired omelet is a best-kept secret and the salt-meadow lamb is to die for. The savory and juicy meat went very well with apple cider. If you’re looking for a tasty snack to bring home or munch on the road back to Paris, check out Biscuiterie La Mère Poulard for some mouthwatering bites!

How Long Should You Spend at Mont-Saint-Michel?

We would say up to four hours. But it really depends if you want to chill, see the abbey and have lunch. Don’t forget to add the walking time back and forth from the parking lot. It’s going to be 45 minutes one way so 90 minutes for both.

Can You Stay Near Mont-Saint-Michel?

Heck yeah! We found plenty of B&Bs and hotels near Mont-Saint-Michel, which should be cheaper than staying on the island itself.

If you want to stay overnight on the island and return the next day, Auberge Saint Pierre will give you a decent sleep. It’s set right on the Grande Rue, sandwiched between a 15th-century wood-framed house and former fishermen’s lodgings. Auberge Saint Pierre is an eyeshot from the abbey and is swathed by a bustling shopping scene.

Even though you’ve gotta commute if you stay further away in the surrounding area, it’s actually not the end of the world. If you can, reserve a room with your favorite hotel in Pontorson, or La Grève. Rent a car or at least a bike because it’s going to be forever if you walk!

Final Words: Is Mont-Saint-Michel Worth It?

YES! If you ever have a chance to hit Normandy, please spend a day, join a tour to Mont-Saint-Michel or it’s a huge mistake if you skip.

Yes, it’s far and planning is a big business. But once you make it to the island, it’s going to be a lifetime memory. Make sure to layer up and splash on sunscreen as it’s going to be windy and sunny when you’re there. The temperature drops by night so we think it’s better to go in summer.