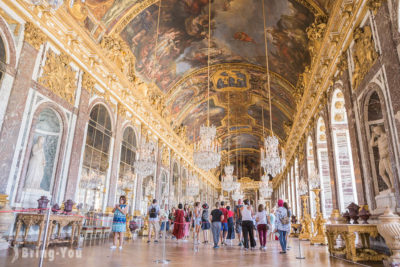 The Palace of Versailles: A Digestible Travel Guide | Ticket Tips | Wait Time & What to Expect 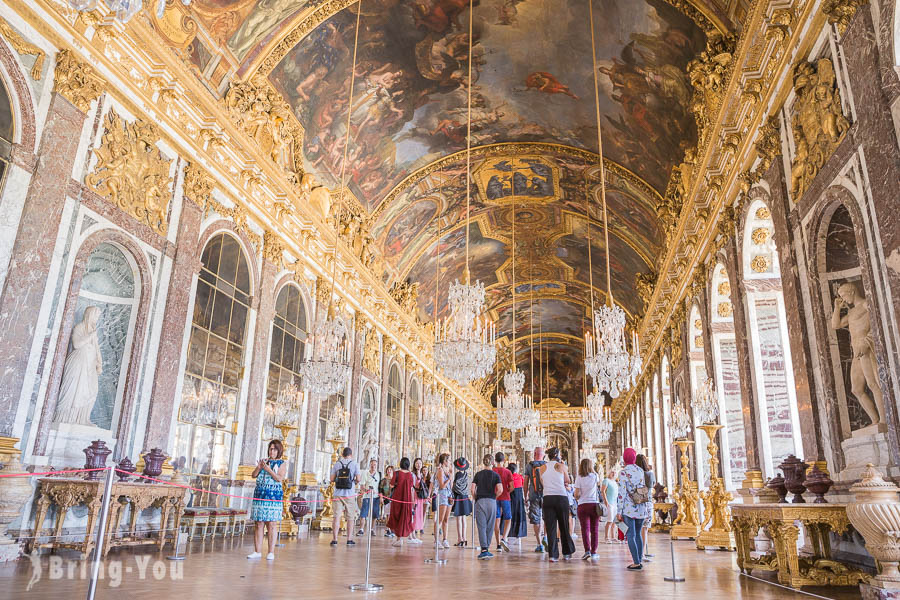 This handy guide to the Palace of Versailles gives you a head-up before setting out for the first time. Here’s how to get to the palace of Paris, ticket tips, the best areas to visit, and more.

And he was right!

Today, even after all those years, the Palace of Versailles is still an icon of politics, luxury, architecture, and holding untold stories that blow your mind the day you set foot into this dramatic building.

Château de Versailles is world-famous. But, we promise you, not until the day you enter the palace yourself, no film nor movie can display the sheer golden glitz and glamor the palace is beholding.

How to Get to the Palace of Versailles from Paris by Train and Bus?

To get there, taking the RER C train is the most common way. It departs from Métro stations in the center of Paris and arrives at the Versailles Château Rive Gauche station. This is the closest station to the Château de Versailles. The trip lasts around one hour, plus ten minutes walking to the château from the station.

The SNCF train hails from Gare Montparnasse in Paris to the Versailles Chantiers station in less than 20 minutes,  plus fifteen minutes walking to the château from the station.

It departs from the Pont de Sèvres Métro Station (end of the Métro line 9) in Paris to the Palace of Versailles.

We can’t stress enough how tiring it is to line up to get into the palace! We bought the Paris Museum Pass, which was already a wise move but you have to understand that queuing is unavoidable even if you obtain the museum pass.

It got us waiting in line for two hours in the scorching sun of summer. And it was even worse for those who didn’t obtain any pass beforehand. They had to queue in another designated line. And we’re sure you don’t want to be one of them.

Alright, we have two options which we think are the best moves: you can either obtain the Paris Museum Pass as we did or join a guided tour. The Museum Pass will give you priority access once you’re inside even though you can’t expect to skip the line when you’re outside.

Out of the two, the latter option takes the crown because you don’t have to queue. There is a Priority Entry for visitors in a guided tour, and the amount of information and stories revealed by the guide is second to none.

If there are other tips to give you a head up, just make sure to avoid weekends if you can! Plus, visitors below 18 can get in free.

What to See at the Palace of Versailles?

It seems like everything about the palace itself was designed to dazzle. The entire complex beholds 2300 rooms and was recognized as a UNESCO World Heritage Site.

Even though you can’t take in all of the details within a single trip, spending a day at the palace is good enough to cover the surface of the palace.

The huge collection of artwork is already there to amaze. Keep comfy shoes by your side, bring some snacks, and here are our favorite areas to visit at the palace!

Spanning over a massive tract of land, the gardens surprise you with opulent golden fountains and sculptures to occupy a romantic, leisure walk.

Formerly known as Chambre du Roi and the salle du Trône, seated the King as he gave his regular hearings. The throne he sat on was later moved into the Hall of Mirrors.

A mind-boggling, opulent hall becomes one of the most visited compartments. The ballroom stretches 73 meters adorned with 17 enormous arches and 17 arcaded windows. Look out to the windows and you will see the massive, sun-kissed gardens on one side of the hall.

This is a series of rooms and suites serving King Louis XIV. It occupies the principal floor of the Chateau Neuf which is also the oldest part of the complex. It was strictly regulated as a private living quarter of the King.

Boasting a gorgeous Neoclassical style, the Trianon Estate is located on the grounds of the palace that make for a lovely stroll. The sun-soaked garden is full of flowers, bringing out a serene setting to decompress.

Final Words: Best Movies to Watch Before Your Visit & How to Fully Buckle Up before Visiting the Palace of Versailles

The infamous drama series aired between 2015 and 1018 showcasing the untold stories about affairs, political movements, and how the drained budget gradually led to the downfall of King Louis XIV.

This is our favorite movie about Versailles of all time! Kirsten Dunst totally nailed her role as the fabulous yet ill-fated Queen Marie Antoinette who arguably led to the fall of Versailles during her reign, luxurious soirées, and internal struggle after marrying the King of France.

Aired in 2012, Farewell, My Queen angles the event around the relationship between Marie Antoinette and one of her readers during the first days of the French Revolution.

What to Expect before Visiting the Palace of Versailles?

Don’t forget to download a free Palace of Versailles app before coming. It includes an audio guide that covers the Palace, the Gardens, the Trianon Estate, and the Gallery of Coaches, as well as an interactive map of the Estate.

If you’re not part of a tour, get there early and expect lots of tour buses and queues before the palace opens.

Restaurants at the palace will make your budget scream in pain. Don’t eat there!

Most of the time, the crowds will see the Palace first then the gardens followed by Marie-Antoinette’s Estate. Go backward to dodge the crowds!