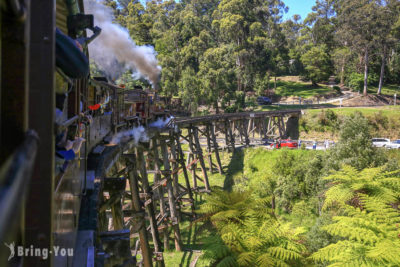 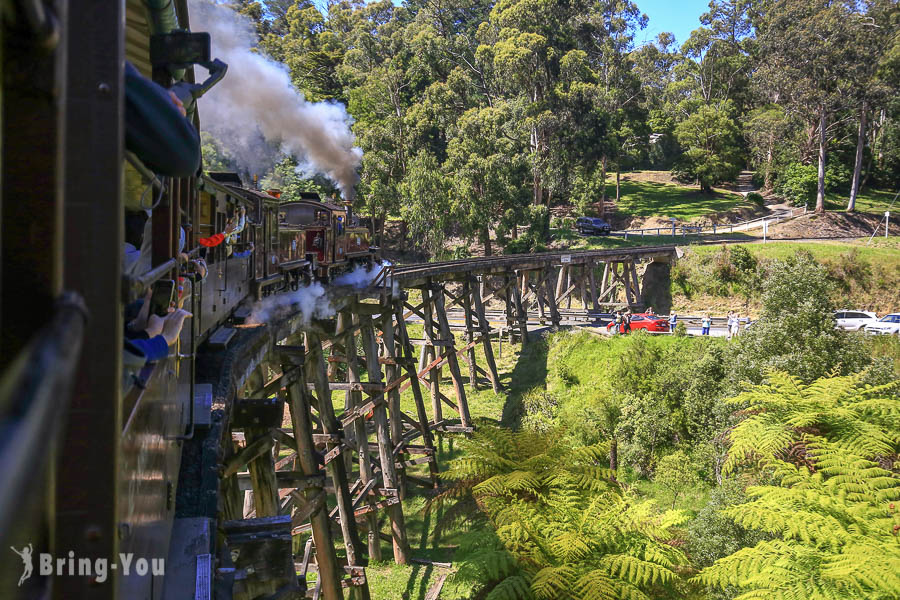 How far is the Puffing Billy run? Which is the best route? Which side should you sit on the train? This travel guide to Puffing Billy will answer them all.

Give me a ticket to the past. All come aboard and get back in time to the old days of Melbourne!

The country-famous retro railway of Puffing Billy Railroad is tied to the history of the land, where more than half of the workers today are unpaid volunteers.

Puffing Billy once served the local communities, carrying anything from passengers to timber in the last century. And today, the train ride turns into an excellent time capsule, leaving you an amusing journey crossing through the beautiful forests of the Dandenong Ranges approximately 50 kilometers east of Melbourne.

If you’re visiting Puffing Billy for the first time, check out this little guidebook to get yourself ready with all the helpful tips for tickets, train routes, the best seats on the train, and more.

How Many Stations Does Puffing Billy Have?

Puffing Billy Railway has six stations, starting from Belgrave and ending at either Lakeside or Gembroke:

Belgrave Station is where the train leaves. It is also the headquarters of Puffing Billy Railway. From Melbourne, you catch the train at the Flinders Street Station on the Belgrave line and you’ll be there in the next 70 minutes. Once you get off the train, look for a blue line painted on the platform guiding you to a short walk to Puffing Billy’s Belgrave Station.

You can also drive to one of the stations by yourself and leave your vehicle in the parking lot at each station. Alternatively, sign up for one of the day tours combined with hotel pick-up and wildlife watching at Healesville or Phillip Island visit up to your liking.

The two-hour train ride heads to the abundant forest of Sherbrooke, with multiple landmarks peeking at you along the way, including the Monbulk Creek trestle bridge.

As soon as I got there, I headed to the ticket office to get the physical ticket from the one I bought online. If you approach it the same way as I did, I promise it will help you secure your seats beforehand. There are multiple types depending on which route you’re looking at. The route between Belgrave to Lakeside is only an hour long while Belgrave to Gembrook is an hour and 50 minutes.

What to See on the Puffing Billy Heritage Train Ride?

Once the train is about to depart, the conductor will ring a bell to signal every one of the departures and close the door. After getting on the train, the best position to enjoy the view is on the right side of the train. It will give you a wonderful sweeping view of a big curve when the train crosses the bridge.

If possible, don’t just stop with a picture or two. Try to keep your camera standing still for a timelapse or record the landscape speeding through the window. Some of the corners are spectacular, especially when it passes through the big bend of the wooden trestle (which will happen in less than a minute after the train ride begins).

The lush jungle swathing the railway is peppered with residential houses, farmlands, and old-growth trees. Even better, the locals will stop to gaze at the train coming through with their hands waving towards the windows.

As the coal-steamed train swarms slowly towards the end of the railway, the hot gasses released from the coal flow forward through the tubes to the front of the locomotive. When you look up to the sky, you can see the steam rising to the top of the boiler and escaping into the air, introducing a nostalgic prospect where time seems as if it doesn’t exist. If you successfully pull out this shooting angle, I’m sure you’ll be amazed at the end of the day.

A Layover at Menzies Creek Station and Dining at Emerald Station

As time ticks away, you’ll stop at the Menzies Creek Station. The train stops here for 5 minutes waiting for passengers to get off for photos. 20 more minutes go by, you will end up at the Emerald Station. You’ll have about an hour here to find a quick bite at an on-site eatery before returning. On the way back, remember to switch to the other side of the train for a better view.

If you haven’t tried this insanely cool and vintage locomotive before, now is the right time to do so. Don’t forget that I also have some really amazing travel tips to Australia to share with you below: