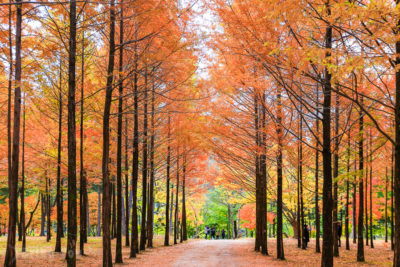 Is It Worth Visiting Nami Island? Here’s How to Plan a Day Trip Like a Pro 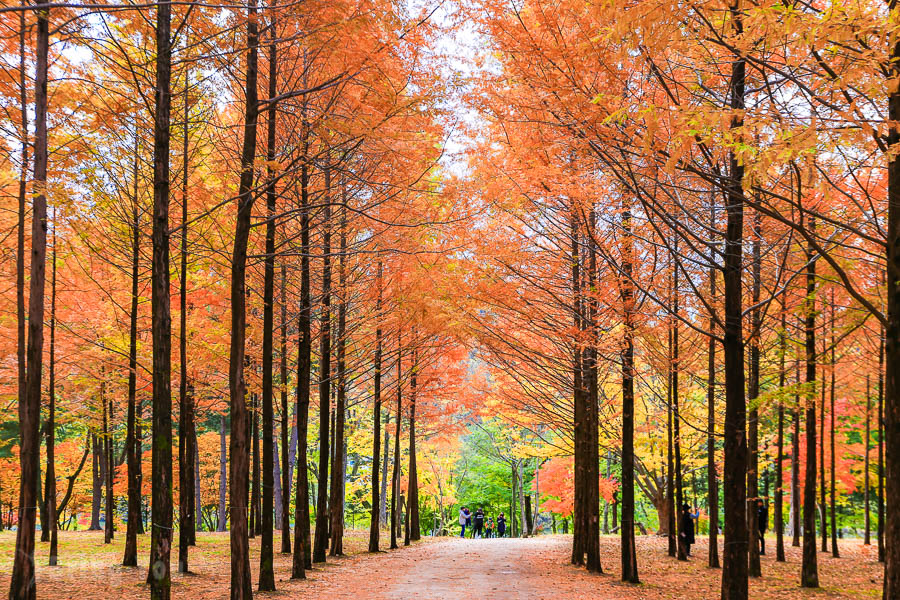 Are you wondering if Nami Island is worth visiting for a day, and what are the best things to do once you’re there? This autumn travel guide to Nami Island will give you a heads-up.

If you’re looking for the best spots to soak in the autumn vibe of Korea, look no further than Nami Island! Encompassing a small footprint of only four square kilometers, Nami Island is a fairy-tale destination that can be easily reached from Seoul by train.

Get your mind detoxified with the abundance Nami has to offer. Everywhere around the island, gardens and shaded walkways pop up at every turn, hooking you in with the sheer beauty of chestnut, pine, ginkgo, and Metasequoia trees.

Lying under the shades is a range of outdoor activities you can engage in within one day. From checking out the scenic gardens and chilling by the yummy foot spots, to exploring famous K-drama and riding the zipwire car – Nami Island will have you spoiled.

Read more to find out what to do on Nami Island and how to get there.

How to Get to Gapyeong from Seoul?

You can get on the ITX train from two different stations: Cheongnyangni Station (60 minutes to Gapyeong Station) and Yongsan Station (90 minutes to Gapyeong Station). At each station, you will find a ticketing counter. On-site tickets come in handy if you don’t have time to plan ahead and rather go with the flow. On the flip side, it would be a pain in the neck during school break and high season when ticket slots are sold out fast.

In this case, my go-to approach is to opt for online tickets no matter if the season is high or low. Deals and steep discounts are constantly restocked on my favorite travel apps (KLook and Traveloka) – and to be frank, I cannot live without them. No wait line, big deals, hassle-free – online tickets for the win!

Now once you have the tickets at hand, simply show your physical ticket to the staff at the boarding gate for you to take the ITX train. In case you use online tickets, reveal your printed ticket or soft copy ticket (e-ticket) from your smartphone to the staff for check-in.

By Joining a Day Tour

Signing up for a tour is the best way to explore everything inside out without any hassle, especially when you don’t have the time to arrange everything from tickets to checking the train timetable, from catching the right bus to avoiding the waiting line.

The day trip I signed up for covered both Nami Island and other scenic spots nearby such as the Petit France, Garden of Morning Calm, and Gangchon Rail Bike.

How to Get to Nami Island from Gapyeong Station?

When you reach Gapyeong Station, you have 2 options to get to Nami Island:

The scenic bus ride takes you to all of the major spots around Nami Island including the Garden of Morning Calm and the Gapyeong Rail Bike. It’s broken down into Route A and B. Route A travels between Gapyeong Terminal, and the Garden of Morning Calm, with 12 stops in between; while Route B traverses between Jat-Hyanggi Pureunsup Forest Recreation Park and Petite France.

Once it takes you to Gapyeong Wharf, get off and take a zip-wire, a taxi, or a ferry to Nami Island. The taxi stand and the bus stop of Gapyeong City Tour Bus are located right in front of the Gapyeong Station.

Riding the zipline is one of the most common ways to hop on the island from the top of the platform to Nami Island, soaring over the Han River towards the wooded grove of Nami Island.

The zipline ride is 5 minutes long but the downside to it is the insane wait time to get the tickets. If you don’t reserve the tickets in advance, the maximum wait time can stretch up to 2 hours. You can sign up for either the Family Course (40km/hour) or Adventure Course (80km/hour).

Riding the ferry was my top choice as it was part of the day trip I signed up for. If you’re traveling by yourself, then you can get the tickets at the Gapyeong Wharf. Fare and timetables are available online.

How to Spend a Day on Nami Island?

I arrived at Nami Island just before noon. The breezy day and the subtle sunlight piercing through the fall foliage make it even more amusing to walk around. That being said, autumn around the end of October and November is the peak season to visit Nami Island.

The boat runs every 15-30 minutes and only 10 minutes to get to the island. After collecting the ferry ticket, our guide gave us a heads-up about the best walking routes, the best things to do, food spots, and returning time. After hopping aboard, a pleasant exploration around Nami Island on foot began.

Before jumping into the itinerary, I’m gonna spill some tea about the history of the island. It all started in 1944 when Nami Island was established. However, the island stood deserted for quite some time. Not until two decades after its establishment did the tourism scene go into overdrive when Sujae Minn Byeong Do buy the island. Today, Nami Island beckons over three million visitors every year, with the biggest hook curated about art, landscape, history, and food.

Administration-wise, Nami Island is declared as The Republic of Naminara which is ‘culturally independent of the Republic of Korea. Even though the island is still part of South Korea politically, the cultural appeal and the story behind are still a great touristic approach.

Start the walk with a tribute to General Nami whom the island’s name takes after. He was the one to demand his troops put down an uprising in the North East of Korea in 1467. You can find his memorial just a few steps away from the ferry station right after you disembark.

Just past the memorial is a small rail track where you can take a scenic ride on a blue train around the island. On the left side of the railway, I found a small cafeteria with a stunning view near the water just outside of the glass wall. Munching on some tea and chowing down a sizzling cheese pizza is the best way to stock up my empty stomach before the walk.

Take on the Scenic Walkways around the Island

Other than trains and walking, cycling is the most common way to get around Nami Island with ease and soak up all the gorgeous scenes.

One of our favorite paths on the island is Metasequoia Lane. The entire path is blanketed with marvelous ginkgo and Metasequoia trees filling the ground with orange leaves. Keep walking and you’ll spot a small bank (like really tiny) to exchange Korean won for Nami coins. On top of the roof are the national flags of both ‘countries’ arranged next to one another.

Other than that, Cherry Tree Lane is another breathtaking spot that comes alive every spring. All of these Insta-worthy avenues are well-marked and connected into a massive scenic system. They are all lined up with pine trees, white birch, redwood trees, and tulip trees. Each pathway is peppered with quirky, unique artworks and sights.

Check out the Winter Sonata Garden and Statue

On the southeast of Nami Island lies a relaxing garden called Gonsaengwon which is also known as the Winter Sonata garden. The spot was featured in a classic namesake Korean drama aired in 2001. Today, they lay statues of the two main characters beside some recognizable spots from the Winter Sonata series – not only in the garden but also all around the island.

I know traveling around South Korea and planning everything ahead can be a daunting task for first-time visitors. So here are my curated guide to help you arrange everything with ease so you don’t have to look them up yourself: